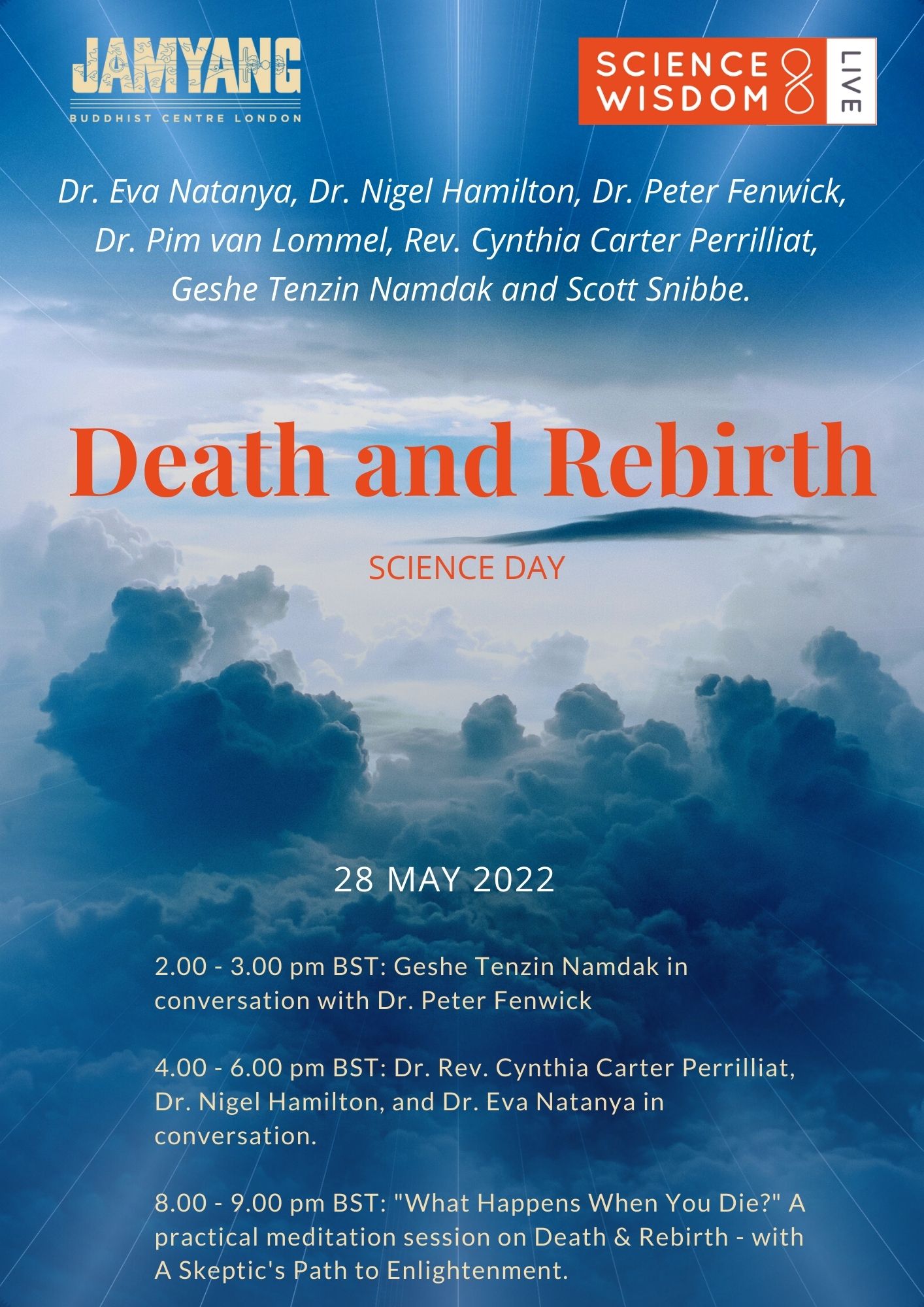 Death & Rebirth: A Day with Contemplatives and Scientists

Death & Rebirth: A Day with Scientists and Contemplatives

8.00 – 9.00 pm BST: “What Happens When You Die?” A practical meditation session on Death & Rebirth – with Scott Snibbe of A Skeptic’s Path to Enlightenment.

Podcast episode: Dr. Pim van Lommel in conversation with Geshe Tenzin Namdak (to be released before the day itself).

After the success of our first two Science Days, we are organising this third Science Day on the challenging subject of Death & Rebirth.

Most people associate death with deep sadness, shock, and a long period of trauma and healing afterwards. Depending on the age of the person dying, the way that their death takes place, and/or the state of mind of the person themselves during their death process, we might experience strong emotions and feelings of incomprehension, fear, and depression.

Someone might die in an accident, or they might have taken their own life. Family members or friends might cope with terminal illness at a young or old(er) age. Especially these cases of ‘unexpected’ death, young death, or difficult/painful (with a long process that leads to) death, can result in a challenging post-death experience for the relatives and/or friends of the deceased. Before, during, and after the death process, there are often many questions that arise, from ontological questions about life, death, and the possibility of rebirth, to questions that have to do with our own certain death in the future.

Could a more spiritual understanding of death help us to prepare for the death of our loved ones and ourselves? Are there certain contemplative tools that might assist us during these times of deep emotional and ontological upheaval? And is there something like rebirth – either as reincarnation in a new sentient life (Buddhism), in heaven or the hereafter (Christianity and many indigenous religions), or in life itself (Sufism) – that links into the experience of death?

During this third Science Day, scientists will go into an open dialogue with contemplative practitioners to discuss death and the possibility of rebirth. They will touch upon the many taboos around death in our culture, share their knowledge about contemplative tools that might help us in facing death, and discuss the possibility of rebirth or the notion of reincarnation.

We will close the day with a practical meditation session, lead by Scott Snibbe, on the question “What Happens When You Die?”, in which we will explore through meditation a precise series of steps that our consciousness may experience as we die, in order to probe the boundary of life and death with curiosity and wonder.

Tickets are now available via Eventbrite.

Dr. Eva Natanya is the Executive Director and Resident Teacher of The Center for Contemplative Research. A scholar of Indian and Tibetan Buddhism, Christian theology, and comparative religion, Dr. Natanya has served in many
capacities as a spiritual teacher, academic lecturer, translator and editor of Tibetan texts, writer, and retreat leader.

Following a nine-year career as a professional ballet dancer with both the New York City Ballet and the Royal Ballet of England, she earned an MA in Christian Systematic Theology at the Graduate Theological Union, and a PhD in Religious Studies from the University of Virginia. Her dissertation examined the complex interactions of Madhyamaka, Yogācāra, and Abhidharma teachings as they underlie the Vajrayāna philosophy of Je Tsongkhapa. She has worked closely with Dr. B. Alan Wallace on his translations for several books on Dzogchen, including Open Mind and Fathoming the Mind, and has co-taught meditation retreats with Dr. Wallace around the world.

In a Christian context, she co-authored Living Resurrected
Lives: What It Means and Why It Matters with Veronica Mary Rolf. She has spent more than three years in solitary meditation retreat, and now serves as executive director and resident teacher at the Center for Contemplative Research at Miyo Samten Ling Hermitage in Crestone, Colorado.

Originally a research physicist at the Massachusetts Institute for Technology in Boston, USA, he has a particular interest in transformative dreaming and has facilitated dream groups and trainings in the UK and on the Continent for many years. Nigel has continued to develop the dream research that formed the basis of his PhD in transpersonal psychotherapy and has presented several papers in the UK and abroad via the International Association for the Study of Dreams (IASD). He is the author of the recently published Awakening Through Dreams: The Journey Through the Inner Landscape (2014).

Nigel is also the UK Representative of the Inayatiyya Sufi
Order, International and has an extensive background in Sufism, alchemy, and guiding spiritual retreats spanning thirty years. He likes to play the bagpipes and ride his motorbike (but never at the same time!).

Dr. Peter Fenwick (born 25 May 1935) is a neuropsychiatrist and neurophysiologist who is known for his studies of epilepsy and end-of-life phenomena. Fenwick is a graduate of Trinity College, Cambridge, where he studied Natural Science. He obtained his clinical experience at St Thomas’ Hospital.

Fenwick is a senior lecturer at King’s College, London, where he works as a consultant at the Institute of Psychiatry. He is the Consultant Neuropsychologist at both the Maudsley, and John Radcliffe hospitals, and also provides services for Broadmoor Hospital. He works with the Mental Health Group at the University of Southampton, and holds a visiting professorship at the Riken Neurosciences Institute in Japan.

Fenwick is the president of the Horizon Research Foundation,
an organisation that supports research into end-of-life experiences. He is the President of the British branch of the International Association for Near-Death Studies. Fenwick has been part of the editorial board for a number of journals,
including the Journal of Neurology, Neurosurgery, and Psychiatry, the Journal of Consciousness Studies and the Journal of Epilepsy and Behaviour.

Fenwick argues that human consciousness may be more than
just a function of the brain.

“The plain fact is that none of us understands these phenomena. As for the soul and life after death, they are still open questions, though I myself suspect that NDEs are part of the same continuum as mystical experiences.”

In addition to his sensational study published in the distinguished British medical journal The Lancet, van Lommel has authored chapters in several books about near-death experiences and also published many articles about the subject.

Over the past several years, van Lommel has been lecturing
all over the world on near-death experiences and the relationship between consciousness and brain function. In 2005, he was granted the Bruce Greyson Research Award on
behalf of the International Association of Near-Death Studies. In 2006, the president of India awarded him the lifetime achievement award at the World Congress on Clinical and Preventive Cardiology in New Delhi.

Rev. Cynthia Carter-Perrilliat, MPA, is Co-founder and Executive Director of the AC Care Alliance (ACCA) a faith-based program in partnership with clinical, academic, and community organizations, engaging over 40 faith-based organizations and their pastors in Alameda, Contra Costa, San Francisco and most recently Los Angeles county, USA. The ACCA Advanced Illness Care Program™ assists persons needing advanced illness care and their families/caregivers manage physical, emotional, spiritual, social and advanced care planning needs. Rev. Cynthia has over 25 years of experience as a hospice and palliative care educator, trainer and marketing professional. She has served as faculty for the Duke University Institute on Care at the End of Life APPEAL program, which stands for A Progressive Palliative Care Educational Curriculum for Care of African Americans at Life’s End. Rev. Cynthia is a much sought-after motivational speaker and advocate for health equity and inclusion for communities of color. She has served as Board member of VitalTalk an organization that focuses on curriculum and language development for physicians that care for those with serious illness. Under Rev. Cynthia’s leadership the ACCA received the 2021 Excellence in Innovation Award from the American Public Health Association and the Archstone Foundation. Rev. Cynthia is an ordained minister, serving at the historic Allen Temple Baptist Church, Oakland CA, as well as a gospel recording artist under her Splendor Record label, having just released “If I Had A Hammer” the social justice mantra for a new generation of listeners, available on most on-line music platforms.

She is married to Deacon Michael Perrilliat and they have 3 adult children and one grandchild!

Above all else, she gives All the Glory and All the Honor to God for He Deserves It All!

Geshe Tenzin Namdak first worked as an environmental researcher having graduated in hydrology from Van Hall Larenstein University, The Netherlands. He started studying Buddhism at Maitreya Institute in 1993 and took ordination from His Holiness the Dalai Lama before engaging in his formal studies in Buddhist philosophy and psychology at Sera Jey Monastic University, South India, in 1997. He completed the entire twenty-year Geshe program at Sera Jey in 2017 and the traditional one year Vajrayana study program at Gyume Tantric College in January 2019, the first Westerner to do so. Because of his deep interest and background in science and as a member of Sera Jey’s Education Department he spoke on and organized various dialogues and conferences on contemporary science and ancient contemplative wisdom of the mind and its philosophy.

Currently, he is the resident teacher at Jamyang Buddhist Centre, London, and teaches worldwide.