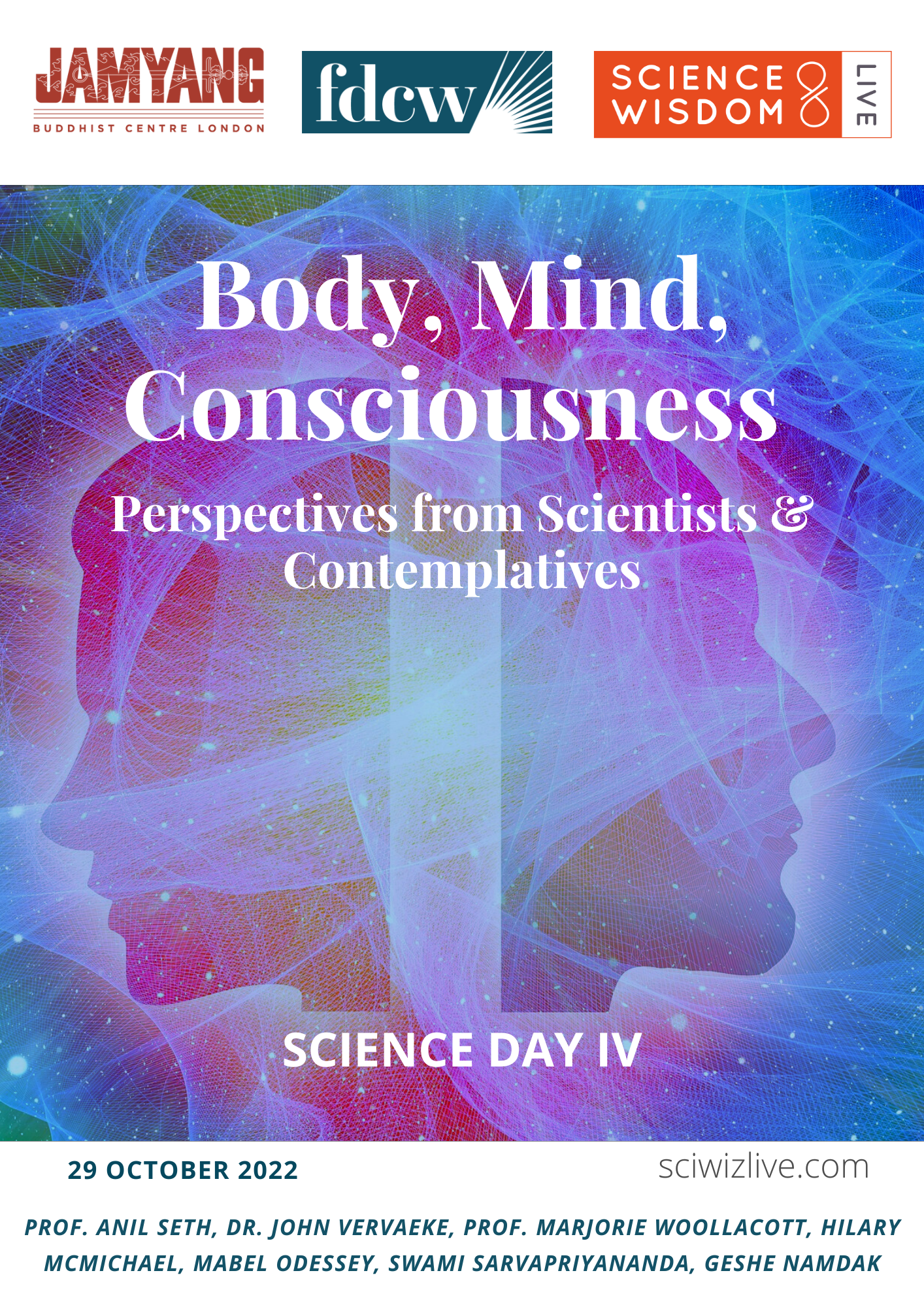 A collaboration between the Foundation for Developing Compassion and Wisdom (FDCW), Jamyang London Buddhist Centre, and Science & Wisdom LIVE.

(Please note: all sessions are shown in London time)

10.00 am BST: ‘Brain, Consciousness, and the Illusion of Reality’

Come and listen to a neuroscientist and a Buddhist teacher who will talk about their view on consciousness. What are the different levels of consciousness? Come and find out in this session where Buddhist monk Geshe Tenzin Namdak and neuroscientist Prof. Anil Seth go into a dialogue together.

This interactive session will allow you to explore how changes in thinking can create changes in how we act and  relate, and find meaning. Mabel and then Hilary will guide you through exercises that awaken you to a shift in consciousness. Come with an open mind; bring some coloured crayons, a few sheets of paper, and enjoy yourselves!

4.00 pm BST: ‘Contemplative Practices: From Body to Consciousness and Back’

How do we relate the body to the mind, and finally to consciousness? What effects do meditation and contemplative practices like Tai Chi have on our mind? And how does our normal consciousness relate to witness consciousness? Come listen to Professors Vervaeke and Woollacott in conversation with Swami Sarvapriyananda!

After the success of our first three Science Days, we are now organising this fourth Science Day on the theme of Body, Mind, and Consciousness.

The relation of the mind to the body has been a topic of debate in both the sciences and philosophy of the East and the West for over 2000 years. In Western philosophy, this topic became most famous through philosopher Rene Descartes in the early 17th century, who wrote in one of his most important works Discourse on Method (1637) the famous (Latin) phrase “Cogito, ergo sum”, translated as “I think, therefore I am”. Later on, in his work Meditations on First Philosophy (of 1641), Descartes began a thorough investigation of how the mind and the body exist together, while also trying to prove the distinct quality of a ‘soul’ and the existence of God. Getting himself moderately tangled up in this last phase of his writings, Descartes unknowingly laid the base for what we now call ‘Cartesian dualism’ as well as the so-called ‘mind-body problem’, which still holds many philosophers in its grip today (most famously illustrated by contemporary philosopher of mind Daniel Dennett).

However, there have been many new approaches since Descartes in the study of mind, body, and consciousness. Not only in the field of philosophy, neuroscience, and the more recent Consciousness Studies (an emerging interdisciplinary field that has it’s own professional membership organisation, the ASSC), but also as a result of influences from Eastern philosophies and non-Western systems of thinking, in which the mind and the body (and consciousness) were never so rigidly separated as in the West. Whereas in the West we often speak about ‘mind’ as something separated from the rest of our body, and more analogous to thoughts, Eastern philosophies like Buddhism often talk about the ‘Heart-Mind’, or ‘citta’, which is a mind that combines all aspects of compassion and love along with ‘thoughts’ and the ability of rational choices.

Moreover, the study of consciousness, which is often equalled to the study of awareness or self-awareness, has opened up an entirely new domain of research in the cognitive sciences as well as medicine studies these past decades. Emerging, new studies which show that also animals have consciousness, still regularly shock the more dogmatic scientists of our world. In neuroscience, too, great steps forward have been made by showing how consciousness might or might not depend on the brain, while the discipline has also generated an interest in the less materialistic aspects of the brain, such as studies on the effects of mindfulness and meditation.

Yet there is still much to investigate and talk about. Body, Mind, and Consciousness all seem to belong together, but we still can’t really seem to figure out how they are connected exactly. How does something immaterial (like consciousness) act on, and interact with, the material body and world around us? Therefore, it might be helpful to bring both scientists and contemplative practitioners together in dialogue, so as to better understand the different positions and experiences that relate to these topics.

During this fourth Science Day, 3 scientists will go into an open dialogue with 4 contemplative practitioners to discuss the relation of mind to body, and consciousness. They will touch upon the many questions around consciousness in our culture, share their knowledge about contemplative tools that might help us in making the connection between our body and our mind, and discuss the far-reaching debates about what (and if!) consciousness actually is.

Tickets are now available on Eventbrite!

Dr. Anil Seth is Professor of Cognitive and Computational Neuroscience at the University of Sussex, Co-Director of the Canadian Institute for Advanced Research (CIFAR) Program on Brain, Mind and Consciousness, an ERC Advanced Investigator, Editor-in-Chief of the journal Neuroscience of Consciousness and a Wellcome Trust Engagement Fellow. He holds degrees in Natural Sciences (MA, Cambridge, 1996), Knowledge-Based Systems (MSc, Sussex, 1996), and Computer Science and Artificial Intelligence (Ph.D., Sussex, 2001).

Dr. John Vervaeke is an Associate Professor, in the teaching stream. He has been teaching at the University of Toronto since 1994. He currently teaches courses in the Psychology department on thinking and reasoning with an emphasis on insight problem solving, cognitive development with an emphasis on the dynamical nature of development, and higher cognitive processes with an emphasis on intelligence, rationality, mindfulness, and the Psychology of wisdom. He is the director of the Cognitive Science program where he also teaches courses on the introduction to Cognitive Science, and the Cognitive Science of consciousness wherein he emphasizes 4E (embodied, embedded, enacted, and extended) models of cognition and consciousness .

In addition, he teaches a course in the Buddhism, Psychology and Mental Health program on Buddhism and Cognitive Science. He is the director of the Consciousness and the Wisdom Studies Laboratory.  He has won and been nominated for several teaching awards including the 2001 Students’ Administrative Council and Association of Part-time Undergraduate Students Teaching Award for the Humanities, and the 2012 Ranjini Ghosh Excellence in Teaching Award.

Vervaeke has published articles on relevance realization, general intelligence, mindfulness, flow, metaphor, and wisdom. He is first author of the book Zombies in Western Culture:  A 21st Century crisis which integrates Psychology and Cognitive Science to address the meaning crisis in Western society.  He is the author and presenter of the YouTube series, Awakening from the Meaning Crisis.

Dr. Marjorie Woollacott, is an Emeritus Professor and prior chair of the Dept. of Human Physiology, and member of the Institute of Neuroscience, at the University of Oregon. She taught courses in neuroscience and rehabilitation, as well as complementary medicine and meditation. She is President of the Academy for the Advancement of Post-Materialist Sciences (AAPS) and Research Director for the International Association of Near-Death Studies (IANDS). Woollacott has received over 7.2 million dollars in funding for her research in rehabilitation medicine.

Her current research interests are in meditation, spiritual awakening, end-of-life experiences and after-death-communication. She has published more than 200 scientific articles and written or co-edited eight books, including Is Consciousness Primary?. Her latest book, Infinite Awareness (2015) (winner of eight awards, including the 2017 Parapsychological Association Book Award, Eric Hoffer Book Award and the Nautilus Book Award) pairs Woollacott’s research as a neuroscientist with her self-revelations about the mind’s spiritual power.

Hilary McMichael is a facilitator in mindfulness-based practices. These courses offer people the holistic tools and resources that they need to access their creative potential inside, using a mind-body-spirit approach. She mainly uses Transformative Mindfulness Methods (TMM), an associate program of the FDCW, to heal emotional challenges with these powerful practices of self-expression.

Hilary is also a qualified MBSR (mindfulness-based stress reduction) and 16 Guidelines instructor, and leads courses in English and French. Her passion for gardening, yoga and creativity add a very practical touch to her work. She lives near the Pyrenees in France.

Mabel Odessey has been studying Buddhism since 2005. Mabel is a teacher of the 16 Guidelines for Life, a program developed by the Foundation for the Development of Compassion and Wisdom (FDCW) that integrates mindfulness with secular ethics.  She is in the second year of a MSc (Masters in Mindfulness and Compassion) at the University of the West of Scotland.

Her background is in photography, specifically pinhole photography. She has exhibited in Europe and north America. Since 2013 her personal work has moved outside traditional gallery settings to engage with larger audiences and  to highlight social issues around old age and exclusion. She lives in a rural village in South-West France.

Geshe Tenzin Namdak first worked as an environmental researcher having graduated in hydrology from Van Hall Larenstein University, The Netherlands. He started studying Buddhism at Maitreya Institute in 1993 and took ordination from His Holiness the Dalai Lama before engaging in his formal studies in Buddhist philosophy and psychology at Sera Jey Monastic University, South India, in 1997. He completed the entire twenty-year Geshe program at Sera Jey in 2017 and the traditional one year Vajrayana study program at Gyume Tantric College in January 2019, the first Westerner to do so. Because of his deep interest and background in science and as a member of Sera Jey’s Education Department he spoke on and organized various dialogues and conferences on contemporary science and ancient contemplative wisdom of the mind and its philosophy.

Currently, he is the resident teacher at Jamyang Buddhist Centre, London, and teaches worldwide.

Swami Sarvapriyananda is the Minister and spiritual leader of the Vedanta Society of New York since January 2017. He joined the Ramakrishna Math in 1994 and received Sannyasa (final monastic vows) in 2004. He has served as an acharya (teacher) of the monastic probationers’ training center at Belur Math, India. He has also served in various capacities in different educational institutes of the Ramakrishna Mission in India and as the Assistant Minister of the Vedanta Society of Southern California. He was a Nagral Fellow at the Harvard Divinity School in 2019-20.

Swami Sarvapriyananda is a well-known speaker on Vedanta and his talks are popular with the internet audience. He has been a speaker on various prestigious forums such as TEDx, SAND and has given a Google Talk. He has also been invited to speak at several universities across the world, including the Harvard University. The swami has engaged in dialogues with eminent thinkers like Deepak Chopra, Rupert Spira and Rick Archer. Swami Sarvapriyananda has played a prominent role in organizing and participating in various interfaith panels and seminars, including speaking at the World Parliament of Religions in Toronto in 2018, and at the United Nations Headquarters in New York.

His popular talks have been compiled into a collection of e-books. “Who am I?”, “What is Vedanta?” and “Dissolve into Infinity” are the titles currently available on Amazon Kindle.