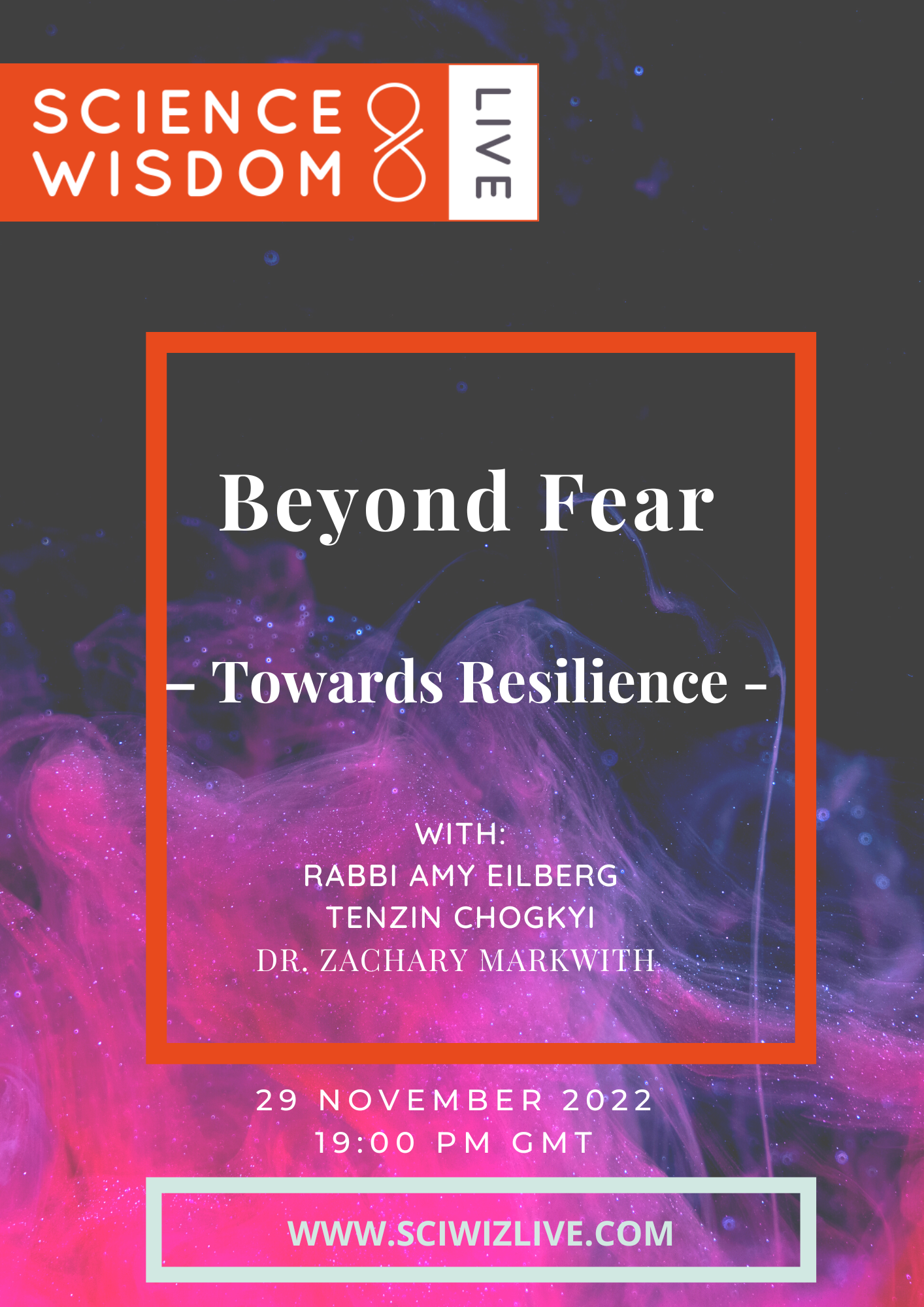 Beyond Fear – Towards Resilience

Beyond Fear – Towards Resilience

Unfortunately, fear seems to pervade our lives: from small fears and insecurities of a personal nature, to larger, collective fears around war, economy, and climate emergency. Yet even beyond these ‘worldly’ fears, there’s a level of fear in everyone’s life that one could call ‘existential fear’ – an ontological fear that links in to our very existence and certainty of death.

Fear has been an important topic in many Western philosophies, and is one of the founding pillars of the field of psychology. Yet what is lesser known, is that many contemplative traditions bring antidotes to fear, and even proclaim that there is something like an unobstructed, fearless ground of consciousness in each human being.

Although fearlessness might be an aim for the future, this dialogue would like to provide a first step from fear towards resilience, with the possibility of discovering this fearless, courageous nature of the mind that most of us have forgotten.

Ticket sale will start soon! Get your tickets on Eventbrite!

Tenzin Chogkyi (she/her/hers) is a teacher of workshops and programs that bridge the worlds of Buddhist thought, contemplative practice, mental and emotional cultivation, and the latest research in the field of positive psychology. She is also a certified teacher of Compassion Cultivation Training and the Cultivating Emotional Balance program.

Tenzin is especially interested in bringing the wisdom of Buddhism into modern culture and into alignment with modern cultural values such as racial and gender justice and environmental awareness. She feels strongly that a genuine and meaningful spiritual path includes not only personal transformation, but social and cultural transformation as well.

Tenzin loves interfaith collaboration and is a volunteer for the Interfaith Speakers Bureau of the Islamic Networks Group in the greater San Francisco Bay Area. She is featured on a monthly radio show called “Reflections on Buddhism on KSQD 90.7 in the Santa Cruz area. She also finds time to create her Unlocking True Happiness podcast which you can check out at unlockingtruehappiness.org where you will also find her current teaching schedule. She is currently based on traditional Awaswas Ohlone land, in what is now known as Santa Cruz, CA.

Rabbi Amy Eilberg is the first woman ordained as a Conservative rabbi by the Jewish Theological Seminary of America.  She serves as a spiritual director, peace and justice educator, and teacher of Mussar (a classical Jewish system of spiritual development).
Rabbi Amy recently served as the Coordinator of Jewish Engagement for Faith in Action Bay Area, a multi-faith, multi-racial social justice organization in the San Francisco Bay Area. She currently chairs Congregation Etz Chayim’s Anti-Racism Impact Team and the Racial Justice Subcommittee of the (Jewish) Conservative Movement’s Social Justice Commission.
Rabbi Amy’s book, From Enemy to Friend: Jewish Wisdom and the Pursuit of Peace, was published by Orbis Books in March 2014. She received her Doctor of Ministry degree from United Theological Seminary of the Twin Cities in 2016.

His research and teaching focus on Islamic sacred texts, early Sufism, Sunni-Shi‘i relations, and the comparative study of religions. He has taught classes on Islam and world religions at the University of California, Santa Cruz, Santa Clara University, and the Graduate Theological Union.

Dr. Markwith is the author of One God, Many Prophets: the Universal Wisdom of Islam (2013) and the forthcoming book And When I Love Them: the Hadith al-Nawafil and the Formation of Sufism (2023).

Zachary has also worked with other non-profit and community-based organizations, including Hub Foundation, the International Peace Project, and Food Not Bombs. Read Zachary’s blog here.