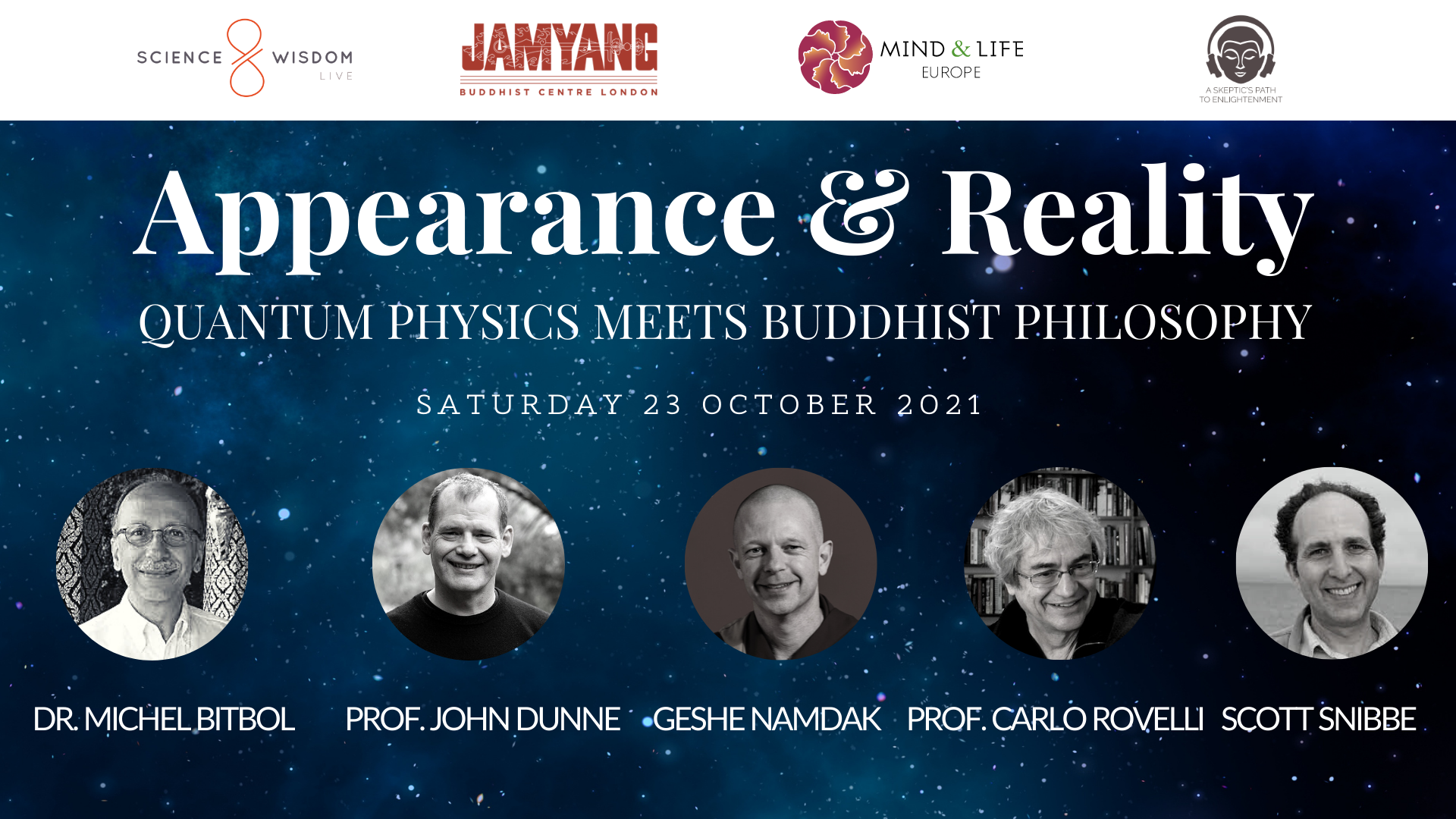 1.00 – 3.00 PM (BST): Reality and the Nature of Mind: Can the Views of Science, Philosophy and the Buddhist Tradition Come Together? A dialogue between Prof. John Dunne and Dr. Michel Bitbol. (Mind & Life Europe)

Physicist and philosopher Dr. Bitbol and Buddhist philosopher Prof. Dunne will discuss interpretations of quantum physics and the issue of realism, the topic of appearance vs reality, the relationship between the nature of reality and mind from the perspectives of science (especially physics), philosophy and the Buddhist tradition. They will touch upon notions such as dependent arising and non-supervenient relations, both in quantum physics and the theory of knowledge (epistemology).

How can the insights arising from meditation and contemplation complement our scientific understanding of reality? Prof. Carlo Rovelli, world-renowned theoretical physicist and author, will explore this question with Geshe Tenzin Namdak during this dialogue on quantum mechanics and Buddhist philosophy.

Prof. Rovelli and Geshe Namdak will discuss the connections between science and Buddhist philosophy, comparing modern scientific ideas with the view of ancient Buddhist contemplatives, such as Nagarjuna. Join them to discover how novel interpretations of quantum mechanics relate to the Buddhist theories of emptiness and interdependence.

Objects around us ordinarily appear as if they are solid, singular, and separate from us. However, both science and the Buddhist understanding of reality show us that as we examine things more closely, things exist far more subtly and richly than they appear. This workshop guides us in meditation to analyze the objects around us according to the Buddhist logic of dependent origination, showing us the interdependence of objects’ myriad parts, the causes that bring them together, and our minds that label these collections of parts as singular objects. Though this meditative analysis is more than a thousand years old, it’s more relevant than ever as we gain deeper insights into the flickering probabilities of quantum mechanics that underly the illusion of reality as it appears.

Join the conversation LIVE on Zoom! You will receive a link via email after registering for the event. After the dialogue, there will be plenty of time for questions and debate.

Dr. Michel Bitbol is Emeritus Directeur de Recherche at the CNRS, in Paris, France. He is presently based at the Archives Husserl, a centre of research in Phenomenology. He received successively his M.D., his Ph.D. in physics, and his “Habilitation” in philosophy in Paris. He worked as a research scientist in biophysics from 1978 to 1990. From 1990 onwards, he turned to the philosophy of physics. He edited texts by Erwin Schrödinger and developed a neo-kantian philosophy of quantum mechanics. In 1997 he received an award from the Académie des sciences morales et politiques for his work in the philosophy of quantum mechanics. Later on, he studied the relations between the philosophy of physics and the philosophy of mind, working in close collaboration with Francisco Varela. He then learnt some Sanskrit and published a book (De l’intérieur du monde, 2010) in which he draws a parallel between Buddhist dependent arising and non-supervenient relations, in quantum physics and the theory of knowledge. He recently developed a conception of consciousness inspired from an epistemology of first-person knowledge, together with a phenomenological critique of naturalist theories of consciousness (La conscience a-t-elle une origine? 2014). More recently, he engaged a debate with the philosophical movement called “speculative realism”, and published a book about it (Maintenant la finitude, 2019).

Prof. John Dunne (PhD 1999, Harvard University) is the Distinguished Chair in Contemplative Humanities at the University of Wisconsin-Madison, where he serves as Core Faculty for the Center for Healthy Minds and as the chair of the Department of Asian Languages & Cultures. John Dunne’s work focuses on Buddhist philosophy and contemplative practice, especially in dialog with Cognitive Science and Psychology. His publications appear in venues ranging across both the Humanities and the Sciences, and they include works on Buddhist philosophy, contemplative practices and their empirical examination and interpretation within scientific contexts. John Dunne speaks in both academic and public contexts, and he occasionally teaches for Buddhist communities. His broader engagements include being a Fellow of the Mind and Life Institute, where he was previously a member of the Board of Directors, and serving as an academic advisor to the Rangjung Yeshe Institute in Kathmandu, Nepal.

Prof. Carlo Rovelli is a theoretical physicist known for his work in quantum gravity. Born in Italy he has worked in the United States, France and Canada. He has founded the Quantum Gravity group at Aix-Marseille University. He is also a member of the Institute Universitaire de France, honorary professor of the Beijing Normal University, Honoris Causa Laureate of the Universidad de San Martin, Buenos Aires, and a member of the Académie Internationale de Philosophie des Sciences. In 1995 he has been awarded the Xanthopoulos Award for “the best relativist worldwide under forty”. Prof. Rovelli has written several global best sellers among which are Seven Brief Lesson on Physics, which was translated in 44 languages, The Order of Time, and the recent Helgoland on quantum theory. He has been included by the Foreign Policy magazine in the 2019 list of the 100 most influential global thinkers.

Geshe Tenzin Namdak first worked as an environmental researcher having graduated in hydrology from Van Hall Larenstein University, The Netherlands. He started studying Buddhism at Maitreya Institute in 1993 and took ordination from His Holiness the Dalai Lama before engaging in his formal studies in Buddhist philosophy and psychology at Sera Jey Monastic University, South India, in 1997. He completed the entire twenty-year Geshe program at Sera Jey in 2017 and the traditional one year Vajrayana study program at Gyume Tantric College in January 2019, the first Westerner to do so. Because of his deep interest and background in science and as a member of Sera Jey’s Education Department he spoke on and organized various dialogues and conferences on contemporary science and ancient contemplative wisdom of the mind and its philosophy. Currently, he is the resident teacher at Jamyang Buddhist Centre, London, and teaches worldwide.

Scott Snibbe is a pioneering interactive artist and augmented reality entrepreneur, is the host of the meditation podcast A Skeptic’s Path to Enlightenment. Snibbe is a twenty-year student of Tibetan Buddhism whose teachers include Geshe Ngawang Dakpa, Choden Rinpoche, Ven. Rene Feusi, Lama Zopa Rinpoche, Gyumed Khensur Rinpoche Lobsang Jampa, and His Holiness the Dalai Lama. Inspired by his teachers, he leads meditations that infuse the pure lineage of the great Buddhist masters with science, humor, and the realities of the modern world. Over the course of a career as a digital artist and entrepreneur, Snibbe has created bestselling art, music, and social apps, and collaborated with musicians and filmmakers including Björk, James Cameron, and Philip Glass. His interactive exhibits have been collected by both science and art museums, including the Whitney Museum of American Art and New York’s Museum of Modern Art.

Each dialogue explores the middle ground between science and contemplative wisdom, focusing on themes such as the ethics of artificial intelligence, gender equality, climate change, and the benefits of mindfulness and meditation for mental health.