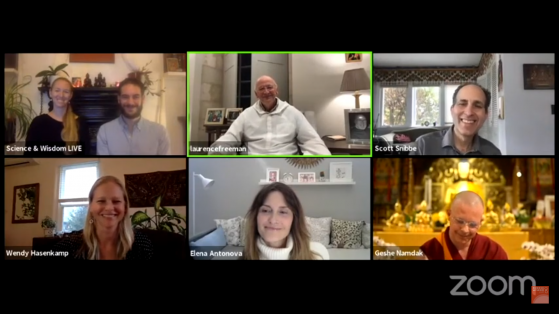 “Why do we call certain emotions 'negative' or 'destructive', and what are the possible antidotes to non-virtuous states of mind? This first dialogue discussed how contemplative traditions offer us practical tools to release the grasp of negative emotions.”

Science & Wisdom LIVE, supported by Mind & Life Europe, aims to bridge the gap between science and wisdom traditions by bringing scientists into conversation with contemplative practitioners on the biggest challenges of our times.

Science & Wisdom LIVE launched its program with an online dialogue on the topic of “Destructive Emotions & Distorted Perceptions.” The event was held on the traditional Remembrance Day, when we commemorate the first day of peace after World War I and remember the lives lost in war.

Two scientists, Dr. Elena Antonova, a senior lecturer in psychology at Brunel University London and a visiting researcher at the Institute of Psychiatry, Psychology, and Neuroscience (IoPPN), King’s College London, and Dr. Wendy Hasenkamp, science director of Mind & Life Institute, joined two contemplative practitioners, Geshe Tenzin Namdak, FPMT resident geshe at Jamyang Buddhist Centre, and Father Laurence Freeman, a Catholic priest and a Benedictine monk of Monastery of Sta Maria di Pilastrello in Italy and the Director of the World Community for Christian Meditation, for a lively discussion on negative emotions and their possible solutions. The event was moderated by Scott Snibbe, host and creator of the podcast “A Skeptic’s Path to Enlightenment.”

The dialogue began with an exploration of why we call certain emotions ‘negative’ or ‘destructive’ and how they can lead to patterns of behaviour that bring suffering to ourselves and others. The speakers then launched into an inspired (and truly inspiring) exchange about the possible antidotes to non-virtuous states of mind, discussing how contemplative traditions offer us practical tools to release the grasp of negative emotions.

“A good place to start is with the use of time, advising people how to structure their daily life in a way that respects the different dimensions and needs of their humanity - physical, mental and spiritual.”

Dr. Elena Antonova and Dr. Wendy Hasenkamp reflected on the scientific approach to the study of our inner world and explored how recent scientific findings, such as neuroplasticity and social baseline theory, can inform a more constructive way of understanding our minds and thinking about emotions.

Dr. Elena Antonova said, “An accepted dogma on which a lot of our Western society is based—and which has dominated our baseline idea of the mental state—is the state of anxiety, survival, vigilance, and separation. (Because we also perceive animals primarily as being in a relationship of predator and prey.) However, some scientists suggest that we should entertain the possibility that serenity, contentment, and connectiveness is our primary baseline, but that this gets disturbed when we’re put in the state of flight or fight response.”

Dr. Wendy Hasenkamp explained, “We need to repattern these entrenched patterns that have been developed over the course of our lives—and potentially inter-generationally—which can be done in many ways. We are learning about neuroplasticity and neural patterning, and that there’s a capacity of the brain to change. We need to reactivate a pattern that’s already there, and then carve a different path. This comes close to contemplative traditions, where we have to sit with negative emotions and where we learn about the role of acceptance and how to lovingly embrace what’s happening to us, after which we can start to create a different pathway or outcome.”

Geshe Tenzin Namdak and Father Laurence Freeman offered their often poetic insights from their own practices and experiences with meditation.

Father Laurence Freeman said, “There’s a variety of spiritual practices, centered in meditation, that can release us from the pattern of the hold of these negative emotions over time, with support from others. … Essentially, as the Buddhist would say, we have Buddha nature—or as the Christians would say, we are in the image of God. We are a living icon of the Divine, yet we need to build up a likeness to God over a lifetime, through becoming aware of ourselves and our problems, and also hoping (and later on trusting) that at the core of our being is an essential goodness, compassion, and virtue.”

Geshe Tenzin Namdak remarked, “We have a potential of the mind, which Father Laurence mentioned is like icon nature, but then there is obscuration—the ‘clouds’ that obscure that nature. So we need to first find acceptance of the problem without getting involved in it (as a neutral observer). This will lead to acceptance and the ability to observe—instead of engaging with—destructive emotions. Then we can start to have an intention for change and repattern our mind accordingly. We then have a freedom before any emotional hijack sets in.”

Science & Wisdom LIVE organises more talks, interviews, and dialogues in 2021. Please have a look at our ‘Events’ page for more information.

The next talk is by Dr. Marco Schorlemmer on ‘The Ethics of Artificial Intelligence: A Humanist Persepctive’. Please join us on Zoom on the 28th of January, 7pm GMT (UK Time). * Reserve your tickets here!*